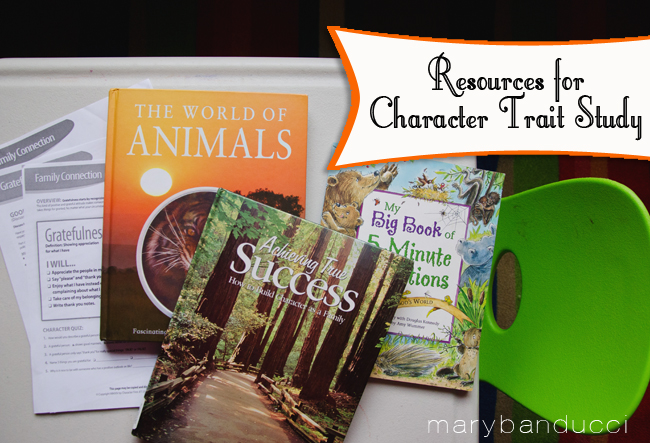 In addition to Character First's free curriculum resources, I've found these other resources below to be extremely helpful. I wanted to share them with you before I jump into our Week of Love because the Homeschool Study will be focusing on one particular character trait.

Primarily, I believe this is important:
Achieving True Success: How to Build Character As a Family

My sister bought this for me and I'm enthralled. It's a great resource and we'll be using it for years to come. It's just one page for each character trait - a little blurb about each animal, what each trait looks like in the home, "I will ___" statements to better understand how to implement the trait, and a Hero of Character where an actual person who has demonstrated that trait is featured.

Eventually, I would like to buy this book The Power for True Success: How to Build Character in Your Life

. From my understanding, it comes from a Christian viewpoint.

Also, leave a comment below on what character trait you would like to work on first for a chance to win a used copy of this book! Like Sweet Roots on facebook and leave a comment there for an extra chance (each) to win! (must enter before Feb 14th at 11:59 pm PST for chance to win).

My Big Book of 5-minute Devotions

We often revert back to this devotional for additional learning if the animal is featured or if I can find another animal with a similar trait. For example, we read "Fleecy Fighters: (p 36) about rams and anger when we talked about self control (Character First Education uses Black Bears as the animal for self-control).

An animal encyclopedia perfect for learning more about each animal. Each time we introduce a character trait, we look up the animal in this encyclopedia.

For us, I've also found that Character Trait Studies involve numerous trips to the library for resource books on each animal and searching youtube for short documentaries. Learning together (pair up with another family or homeschool group) is always advantageous.

I'll update this as I find other helpful resources we enjoy. For now, these three books have laid out a major foundation for our homeschool. We learn about God's creatures, real-life Heroes, and most importantly we learn character traits that will help my children (and myself) be better people.

Question of the Day: What are you learning with your family right now?

UPDATE:
We found these incredible in-depth books by Buddy & Kay Davis. They are more in-depth on individual animals than the World of Animals above (but only speak of 30 animals in each book vs the encyclopedia has everything and is very inclusive).

Posted by Mary Banducci at 1:58 PM

I'm rethinking the way we use herbs in the kitchen and in daily life. It's not always a little dash of this or a sprig of that. All recipes on this blog are dairy and gluten-free. Pour yourself a lush cup of tea and please enjoy Sweet Roots!

All photographs, designs and ideas are created and copyrighted by myself, Mary Banducci (unless otherwise indicated). Please do not use my photos or work without my permission. You can see more of my work at the above link Maryangelo.